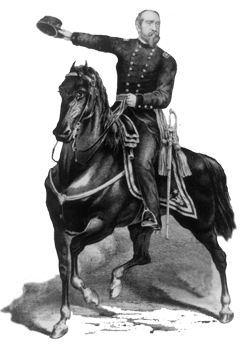 The U.S. Military Academy at West point produced numerous Civil War generals and commanders for the North and South, particularly in the time frame between 1842 and 1850. Leaders, as likely former acquaintances, friends or classmates, respected one another; and yet, they were enemies on the battlefields. Generals Lewis Armistead (S) and Winfield Scott Hancock (N), friends before the war, parted ways and beliefs and opposed each other at Gettysburg during Pickett's Charge on Cemetery Hill. Armistead was captured during the battle and died later from his wounds.

Indeed, the West Point class of 1846 was legendary due to the number of graduates who became generals—for example, George McClellan (N), Stonewall Jackson (S), George Pickett (S), Charles Seaforth Stewart (N) (the highest ranking student of the class of 1846), John Adams (S), Ambrose Hill (S) and George H. Gordon (N). It was the largest class to graduate up to that time. Some classmates fought together in the Mexican War, which had just begun, and then opposed one another during the Civil War.

While Civil War battles are characterized by their horrendous carnage, they created opportunity for new leadership development. General Sherman gained notoriety for his march through Georgia, which split the Confederacy and destroyed their infrastructure; after the war he was given command of forces in the western states. One of his associates, George Armstrong Custer, was lesser known during the war, but also gained notoriety after the war for his stand at Little Big Horn when he battled and lost to Native Americans forces.

Other Civil War commanders who retired afterwards continued to serve their states and the reunited Union as community and political leaders and attempted to reunify the country. For example, Samuel Bell Maxey fought for the Confederacy, and after the war he represented Texas in the U. S. Senate; while Robert E. Lee did not seek office, he spoke for unification and became revered throughout the country.

Return to top of Civil War Generals or link below to the commander, General...