—the general considered
to be the best leader of his time! 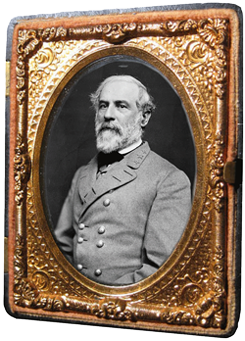 Robert Edward Lee was the son of Henry "Light-Horse Harry" Lee, a Revolutionary War patriot and Virginia governor, and his second wife, Ann Hill (Carter) Lee. Young Robert E. Lee attended West Point, and he graduated with honors. He graduated second in his class without a single demerit against him; and to this day, this honor has not been surpassed.

In the Mexican War, Robert E. Lee was promoted to Colonel due to his gallantry and distinguished conduct in performing vital scouting missions. Later, Lee was in charge of the force that suppressed John Brown at Harpers Ferry.

The first campaign in the Civil War in which Lee led the Army of Northern Virginia, the Seven Days Battles, was fought southeast of the Confederate capital of Richmond in the summer of 1862. Lee and his fellow officers, including “Stonewall” Jackson, James Longstreet, A. P. Hill, and D. H. Hill, pushed George B. McClellan’s Army of the Potomac from the gates of Richmond to the James River, where the Union forces reached safety. Along the way, Lee lost several opportunities to harm McClellan.

The Seven Days have been the subject of numerous historical treatments, but none more detailed and engaging than Brian K. Burton’s retelling in Extraordinary Circumstances: The Seven Days Battles of the campaign that lifted Southern spirits, began Lee’s ascent to fame, and almost prompted European recognition of the Confederacy. (Indiana University Press) 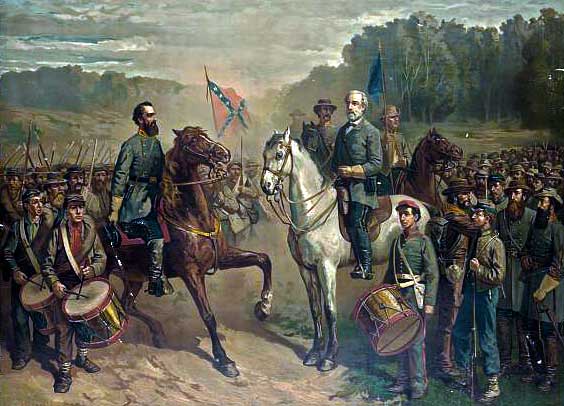 The last meeting of General Lee and General "Stonewall" Jackson by Trunbull Bros., 1879. Subsequently, General Jackson was killed at the Battle of Chancellorsville.

General Lee stopped General McClellan's threat to Richmond during the Seven Days Battle in 1861. Lee then took over supreme command after Brigadier General Joseph Johnston was severely wounded during the Battle of Seven Pines in 1862.

General Lee surrendered to the Army of Norther Virginia led by General Grant at Appomattox, Virginia. The treaty was signed in the parlor of the McClean house, shown below in the photograph by Timothy H. O'Sullivan. The broadside to the right advertised the historic surrender. Due to still slow communication of the surrender, fighting continued in the West, however, Lee's surrender is considered to be the end of the Civil War.

Being in the company of such a high esteemed and knowledgeable commander would be significant. Walter Taylor was "first to last the closest" of all staff officers to Lee. His intimate knowledge is captured in the recognized classic, Four Years with General Lee, which first appeared in 1877 (reissued by Indiana University Press).

On surrender, General Lee lost his ancestral home at Arlington, which was retained in the area set aside for a national cemetery, known as the Arlington National Cemetery.

After the war, Robert Edward Lee sought to heal the wounds between the North and South and became president of Washington College, a small college in Lexington, Virginia, in the Shenandoah Valley region. The school later changed its name to Washington and Lee University to honor the legacy of General Lee, who passed away in 1870.

Return to the top of Robert Edward Lee, or follow the links below...