—from Pittsburgh to Washington and
back as business entrepreneur! 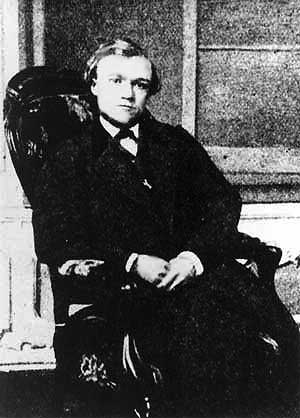 Grit and hard work characterized Andrew Carnegie who was in the right place at the right time. Seizing opportunity as a youth he worked as a laborer in a cotton mill; then, he mastered telegraph technology and became the personal secretary/telegraph operator for Thomas A. Scott, general superintendent of the then fledgling Pennsylvania Railroad. Scott took an interest in the teenager, and Carnegie fast became superintendent of the Pittsburgh division.

(left) Portrait of young Carnegie in 1861 when he went to Washington.

At the outbreak of the war, Scott, as vice president of the Pennsylvania Railroad, was appointed by President Lincoln to be secretary of war. Carnegie, 25, was brought to Washington as superintendent of the military railways and the Union government's telegraph lines in the East.

The oil and timber industries of Pennsylvania were fledgling operations in the early part of the Civil War. Oil had been discovered in 1859 by "Colonel" Edwin Drake along the banks of Oil Creek in Venango County, Pennsylvania (shown above in the map by Samuel Dale of Meadeville, Pennsylvania). This region is located on the edge of Pennsylvania's virgin forests in the northwest part of the state that were then being lumbered for housing and industry. Pittsburgh is about 100 miles to the south. Oil was a major driver to explosive development there and in Pittsburgh, and then, to the rest of the world as the modern petroleum era was born. (Updated information on the region's contribution to the oil industry can be found at the Drake Well Museum, Titusville, Pennsylvania) 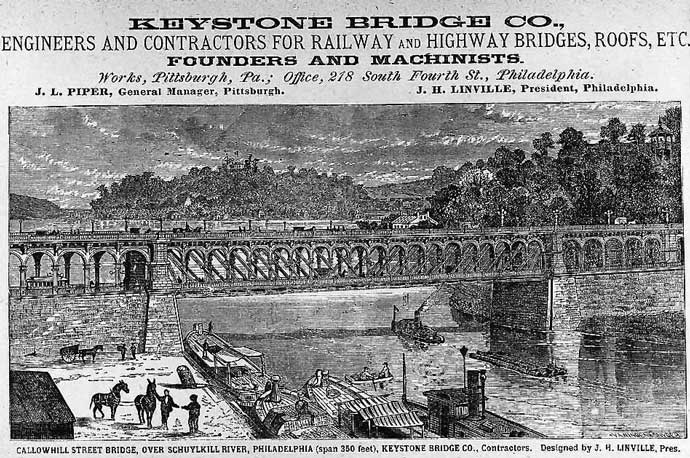 Carnegie returned to western Pennsylvania toward the end of the war, investing in the area's industries—oil, iron and steel—which had been crucial in building war time industries and would help to rebuild the nation. Crucial partnerships in these industries and railroads made him one of the wealthiest men in the United States.  His company, Keystone Bridge Company, used iron and steel in bridges, replacing stone and wood structures. The photo above shows their Callowhill Street bridge, over the Schuylkill River near Philadelphia, Pennsylvania. Oil, iron and steel were key ingredients in the late 19th century to fueling America's industrial revolution.

Return to the top of Andrew Carnegie, or follow the links below...