—from US Congress to
Confederate States of America president! 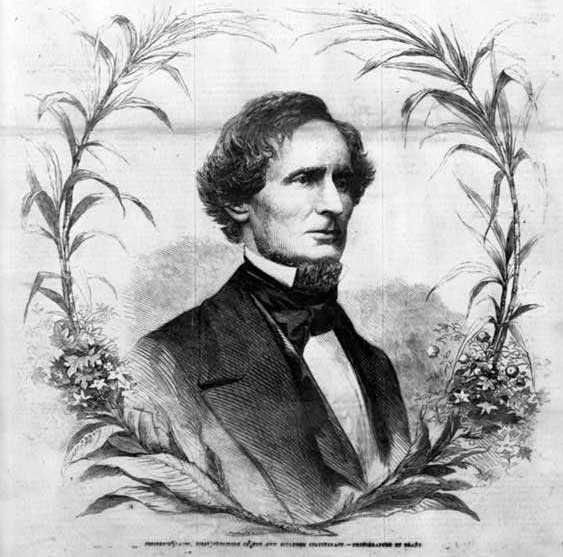 Prior to the Civil War, Jefferson Davis was a renowned statesman, both as secretary of war and as a senator in the United States Congress. Though he argued against secession, he supported the southern states right to secede. At the culmination of the Secession Crisis, he resigned from the Senate and was elected president of the Confederate States of America.

Jefferson Davis sits to the left of the table surrounded by his Cabinet.

Jefferson Davis' zeal propelled the southern cause forward, raising an army that proved quite formidable even though they lacked materials and supplies. However, he was not an effective president because he was unable to get financial and economic support from foreign governments. Also, Davis was also unable to resolve internal political conflicts between the southern states or find a successful battle strategy against the better-equipped North.

The newly formed Confederate States of America tried quickly to get their currency in use to finance their war effort. Coins were minimal because the metal was needed for guns and ammunition, so paper currency was inaugurated. As the Confederates needed more money, they printed more, flooding the market and causing inflation. Also, extra money was printed and distributed by counterfeiters in the North in order to weaken the southern economy. Eventually, the money was worthless, and certainly the government was not around in 1868 when the interest was due to be paid. 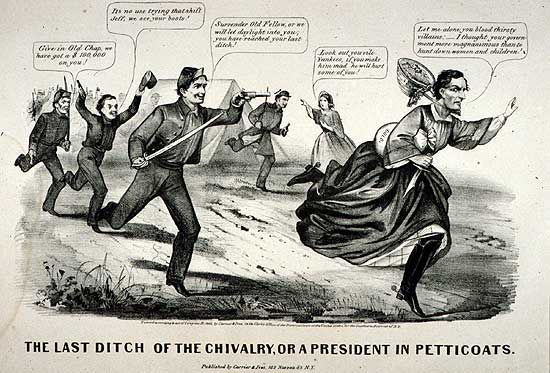 After the war, he was captured and imprisoned. Accounts of his capture indicate Davis was disguised with an apron and bonnet to evade capture, he did not run away as the Currier and Ives cartoon suggests fully dressed as a woman. The Jefferson Davis monument marks the capture spot in Irwinville, Georgia. He was released, however, when sympathetic northerners led by newspaper publisher Horace Greeley paid his bond.

The Federal Government eventually dropped his case, and Davis, though previously idealistic and defiant to the Union, encouraged reconciliation between the North and South. Over time his passion and boldness have made him a hero to many southerners.

Return to top of Jefferson Davis, or follow the links below...