—highlighting heroic acts on both sides!

Though medals of honor came in different styles, they represented the heroic acts that inspired and propelled others to act beyond expectations. Early in the war, medals were given to soldiers who captured battle flags or kept their own flag safe and standing. As long as the troops saw their battle flag still standing, they were inspired to further engage. Later, heroic acts centered around capturing, killing or turning the tide of the engagement. 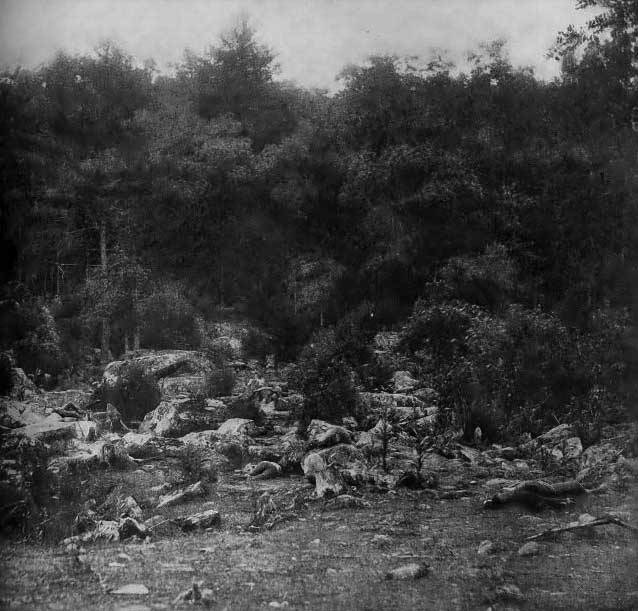 Little Round Top, photographed by Matthew Brady after the battle. Note bodies among the rocks on the bottom right and bottom center. This area, Devil's Den, is just next to Little Round Top and was where some of the fiercest fighting took place, particularly on day two. 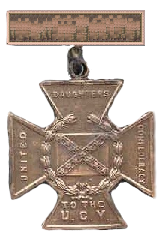 Medals of Honor: On day two at the Battle of Gettysburg 1863, Confederate Major General John Bell Hood moved his troops to attack the Union Army's flank. At Devil's Den Private Wilson J. Barbee from the 1st Texas Infantry climbed on top of a rock outcrop during their attack and began to shoot retreating Union Army soldiers.

Though shot off the rock several times, he returned to his advantage point. Finally, he was wounded so severely that he could not climb back onto the rock. He was honored with the Confederate Medal of Honor, the Southern Cross of Honor.

As the Confederates charged again, Chamberlain, with casualties mounting and ammunition running low, commanded the left wing of his 20th Maine to initiate a bayonet attack down and across the hillside that surprised and forced the Confederate soldiers to retreat. He was awarded the Congressional Medal of Honor.

Gettysburg, the 1993 film based on the book, The Killer Angels, is one of many fictionalized accounts of the Gettysburg battle that day.

Little Round Top in the foreground to the left. 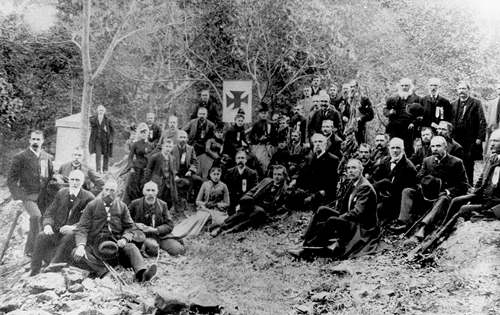 In 1889 veterans of the 20th Maine Volunteer met at Gettysburg, with General Joshua L. Chamberlain, shown in the center front leaning on his elbow to the right.

Return to top of Medals of Honor, or follow the links below...