The title, King Cotton, comes from the fact that cotton was the major export of the United States in the early 1800s just prior to the Civil War time frame. By the 1850s, the cotton grown, shipped, and sold by southerners was worth more than all the rest of America's exports put together.

As the primary crop, cotton overtook tobacco, which had been planted and depleted many of the minerals in the soil. When the Constitution was ratified and went into effect in 1789, tobacco was the most important crop grown in the South. Also, Thomas Jefferson and many other people, in the South as well as the North, thought that slavery would soon disappear in the United States. However, the invention of the cotton engine (shortened to "gin") revolutionized cotton production.  Cotton became the most valuable crop grown at that time—the intrinsic value of cotton then is comparable to the intrinsic value of oil today. It became an economic as well as political instrument.

When the Spanish explorer Coronado visited Florida in 1540-42, American Indians were seen growing cotton. The Spaniards even raised their own crop. However, when America was settled in the 1600s, there was little or no cotton plants to be found. Though some cotton was planted along the James River near the Jamestown settlement, England maintained an embargo on cotton from the American colonies in order to maintain her own sheep and wool industry. So, during the colonial period, cotton was not prevalent nor was it considered a necessary staple for life. Until the Revolutionary War time frame in the late 1700s, many products and goods were imported from England, like fabrics for clothing, curtains, cloths and other household goods. Crop production was reserved for food production and familiar European staples, like tobacco. In 1790, Samuel Slater developed America's first cotton mill in Rhode Island, but he needed a lot more cotton to make his business work. So, Whitney's cotton gin invention becomes even more important and timely.

As the United States grew, immigrates increased, coming from other countries and the West Indies and bringing with them familiar plants. In this manner the cotton plant varieties were imported to the United States; they adapted well to America's southern climate and soil. There were two types of cotton: upland and sea island. Though the sea island variety was of better quality, it could only be grown on the mainland. Upland cotton was favored because it could grow almost anywhere, but the seeds were hard to remove. Cotton did not require machinery to grow, so small farmers and large landowners could grow it. Again, Whitney's cotton gin invention becomes even more important as it helped to increase production. 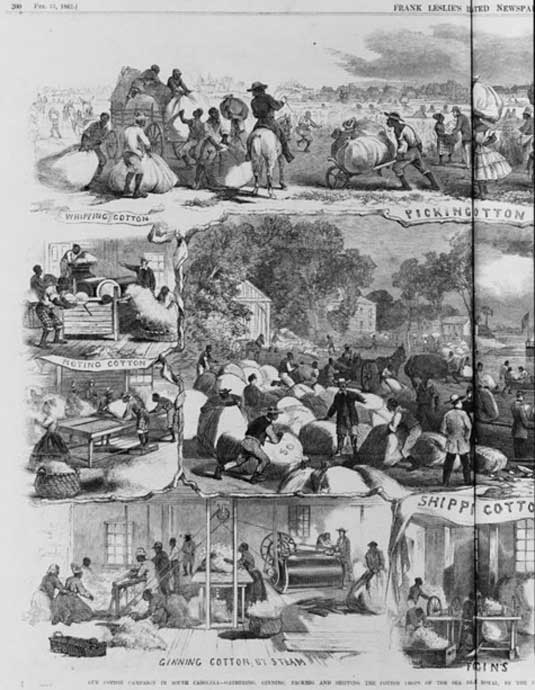 Harvesting cotton required an excessive amount of manual labor. The boll of the plant had to be picked by hand because no other gathering method had been yet invented. It was a tedious task to even walk the hot southern fields gathering the bolls, but even more tedious attempting to separate the dark colored seeds from the cotton lint. Separation of the seed was done at the end of the day, and usually only a pound or two of the cotton lint was separated.

King Cotton, Library of Congress panorama photograph, published c1907. Life in the cotton fields did not change much in the 50 years prior to this photo during the Civil War time frame. Nearby the large fields of cotton, slave families lived in one-room wooden shacks or houses, which often had only a fire hearth for cooking and heating, but did not contain indoor plumbing.

Although cotton production continued during the Civil War, its impact was reduced mainly because of the Union blockade; however, its status is revealing in the photo and caption below from Frank Leslie's Illustrated Newspaper in 1865, which shows a cotton shipment being prepared for shipment to New York. 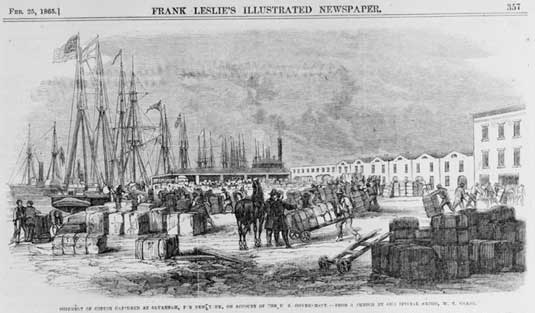 "To the Victors belong the Spoils!"

Though Eli Whitney was only 60 years old when he died in 1825, he left an indelible mark on the history of the United States. As a child of America's War for Independence, having been born in 1765, he displayed a creative yet independent personality, a trait not uncommon with early settlers of America's wilderness. Whitney's father, a farmer, was a person of means. In his leisure made things for his neighbors and maintained good standing in the community of Westboro, Massachusetts.

Like his father, young Whitney had a passion for tools and tinkering. As a child Whitney was credited with making a violin, and as a teenager during the Revolutionary War years, he made and sold hand-made nails. After teaching for several years in nearby rural communities, he attended Yale College, New Haven, Connecticut, using his mechanical abilities to do odd jobs to help pay his expenses.

Whitney graduated from Yale in 1792, wanting to either teach or practice law, but he had to support himself while he studied for his bar exam. A tentative teaching position did not materialize in the South where he had traveled to work; however, through Phineas Miller, also a Yale graduate and former tutor in the area, Whitney obtained a position tutoring the children of Catherine and General Nathanael Greene on their plantation, called Mulberry Grove, near Savannah, Georgia. General Greene, a respected military leader in the War for Independence, had recently died. General Greene had serve throughout the North and also had a connection to Yale. 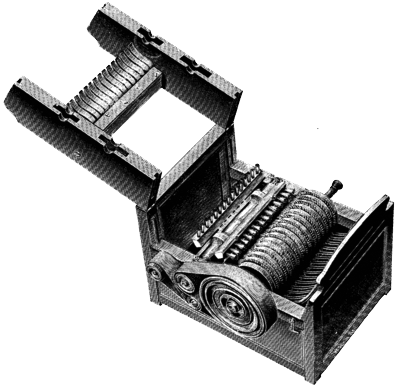 Watching the cotton picking and production process on the Greene plantation, Whitney saw the problem of separating seeds from the cotton lint and quickly began to tinker to find a solution. Whitney describes the making of his cotton engine in 1763. In a letter to his father, Whitney writes,"In about ten Days I made a little model, for which I was offered, if I would give up all right and title to it, a Hundred Guineas. I concluded to relinquish my school and turn my attention to perfecting the Machine. I made one before I came away which required the labor of one man to turn it and with which one man will clean ten times as much cotton as he can in any other way before known and also cleanse it much better than in the usual mode. This machine may be turned by water or with a horse, with the greatest ease, and one man and a horse will do more than fifty men with the old machines. It makes the labor fifty times less, without throwing any class of People out of business." 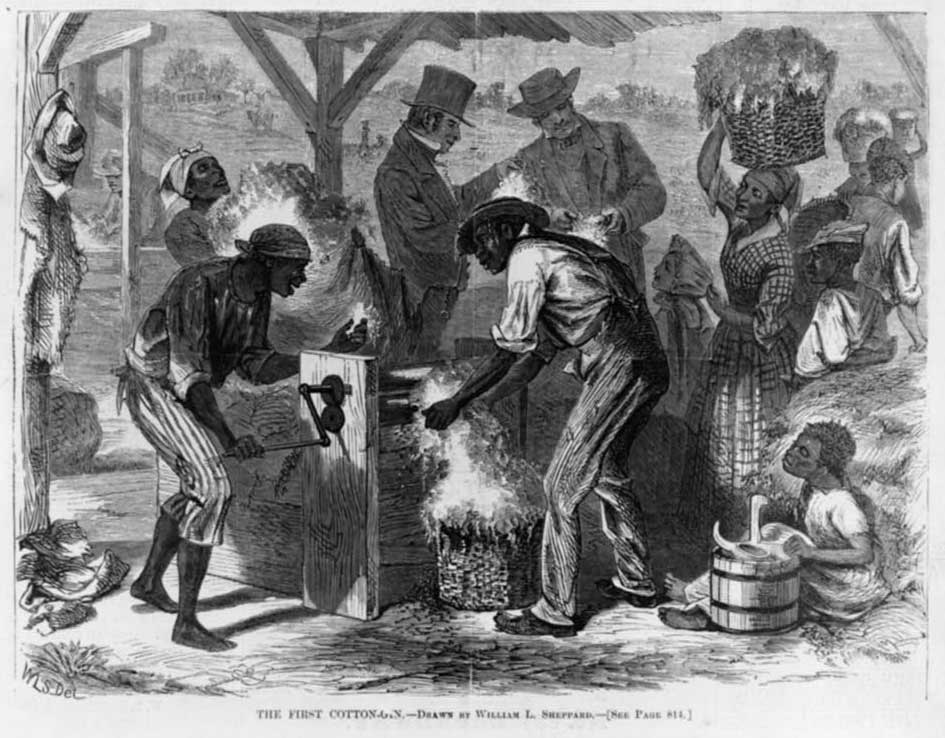 First Cotton Gin, Harpers Weekly, 1869. Illustrated is the event of over 50 years earlier showing a cotton gin in production; however, it shows a Roller Gin version rather than Whitney's Prong Spike invention.

The impact of Whitney's cotton gin invention was immediate. He had automated the seed removal process allowing workers to clean about 50 pounds of cotton a day. Work that had taken days to perform was now done in hours!

Unfortunately, the gin invention was not profitable. Whitney was granted a patent in 1794; he and Phineas Miller formed a partnership and returned to New Haven, Connecticut, to manufacture gins. Though several gin mills were set up in the South, Whitney and Miller charged farmers about two-fifths of their cotton that needed milling. The farmers immediately saw the financial impact on their operations and resented taking their cotton to Whitney's mills for separation. The simple nature of his design allowed other people to more quickly make their own pirated versions of the gin mill, which were sold to landowners. Whitney and Miller became mired in patent infringement battles and struggled to make a profit; finally, they decided to license the design by selling patent rights to different states, like South Carolina, Tennessee and North Carolina. Though this tact was somewhat successful, payment was slow. With the cotton gin patent life span running out, Whitney petitioned Congress in 1812 to renew his patent. 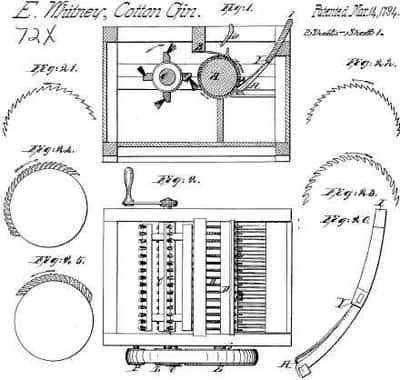 Cotton Gin patent drawing (left). The top of the illustration shows a side section view. The bottom of the illustration shows a top view. Cotton Gin Model (below) on display at the Eli Whitney Museum, Hamden, Connecticut (a few miles outside New Haven where Whitney attended Yale College). Cotton bolls are fed into the gin from the top right; the iron spikes or rods on the far right keep the fiber from falling down but are spaced apart. When the large central cylinder is turned to the left, counter-clockwise, the saw teeth pull the cotton lint through another set of spikes positioned in place but offset on the top center support . The seeds cannot get through the top center support spikes, so they fall back through the spaces in the iron spikes on the far right. The lint emerges on the left and is pulled off the saw teeth and downward with the rotating brushes. 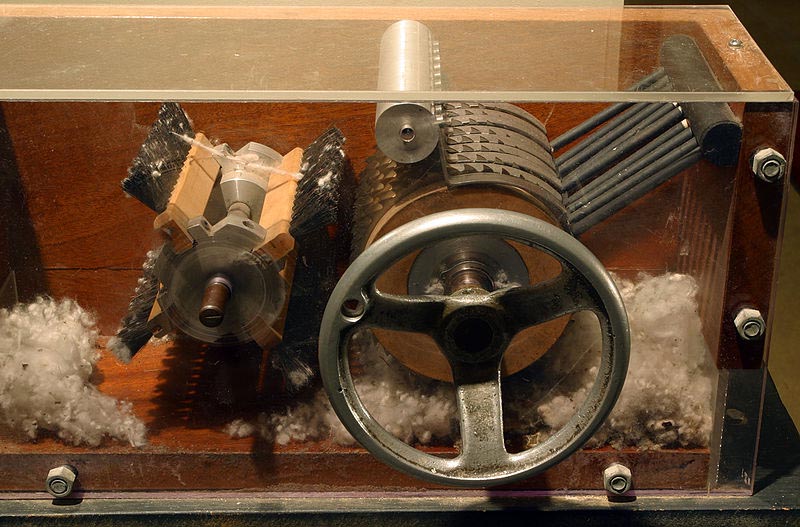 After Eli Whitney invented the cotton gin in 1793, cotton grew in popularity and use and became a treasured worldwide commodity in the early 1800s. By the time of the Civil War, cotton had surpassed tobacco and become the nation's most popular crop. It was white gold. The northern textile mills had a great appetite for cotton from the South. Cotton was shipped to the industrialized North as well as all over the world.

Cotton influenced financial and political decisions. Over time, cotton generated great wealth for some of the southern landowners. From their great staple crops—mainly cotton, tobacco, rice, and sugar cane—southerners received much of their cash income. Most, though not all, of these staple crops were grown on large plantations, although many small subsistence farms existed also. The need for southern farmers to find other fertile land on which to grow cotton, which had depleted the minerals from local landscapes, enticed them westward into the lands included in the Louisiana Purchase.

Slavery became reinvigorated as more labor was needed as cotton production increased. A large labor force was needed for growing and harvesting. That labor force consisted mostly of cheap labor, like black slaves brought from Africa and the West Indies as well as some poor indentured whites who were treated much differently than blacks. Then, large southern land- and slave-owners wanted to protect their major money source.  Subsequently, pro- and anti-slavery beliefs split the nation and was a major cause of the Civil War.

Whitney (who died in 1825) could not have foreseen the ways in which his invention would change society for the worse. The most significant of these was the growth of slavery. While it was true that the cotton gin reduced the labor of removing seeds, it did not reduce the need for slaves to grow and pick the cotton. In fact, the opposite occurred. Cotton growing became so profitable for the planters that it greatly increased their demand for both land and slave labor. In 1790 there were six slave states; in 1860 there were 15. From 1790 until Congress banned the importation of slaves from Africa in 1808, Southerners imported 80,000 Africans. By 1860 approximately one in three Southerners was a slave.

The Industrial Revolution began in England in the late 1700s and spread to Europe and the United States. During this time, from about 1760 to about 1840, production of products and goods transitioned from being handmade to using machines.  Key catalysts that stimulated this the Industrial Revolution were inventions, such as the steam engine invented by James Watt in 1781, which harvested steam power; the sewing machine invented by Thomas Saint in England in 1790, but improved later by American Elias Howe around 1845; and the cotton gin invented by American Eli Whitney in 1793.

Return to the top of King Cotton or follow the links below... 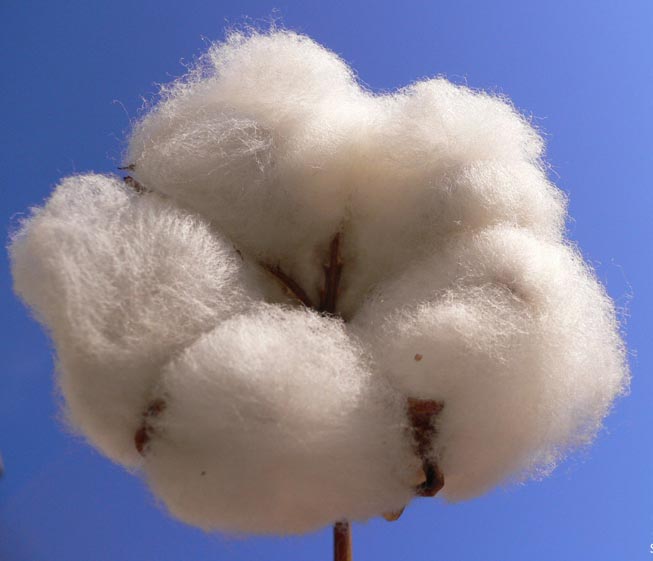