The story of the 54th Massachusetts Regiment is exemplary of African-American service in the Civil War. African-American war service has reflected the changing times. Though often serving with distinction abroad, at home, they were mistreated and dishonored.

Escaping slaves and free blacks in the North may have had a better life than their counterparts in other areas of the United States; however, "a better life" is a qualifying description. Yes, abolitionists supported their cause. However, blacks still lacked the same freedom that whites, even the poorest whites, were granted.

The South and the North showed reluctance to allowing African Americans to serve in their armies. The South needed blacks to stay on the plantations and farms as field hands, and they were used to build battle fortifications.  Though some blacks followed their masters to the battlefield as body servants, others waited on the farms for the right moment to escape, fearing bands of patrolmen. It was late in the war that an attempt by the South was made to allow African Americans to fight. In 1864 a bill passed the Confederate congress, but the war had been going badly and was almost over. Consequently, there was no follow up action. 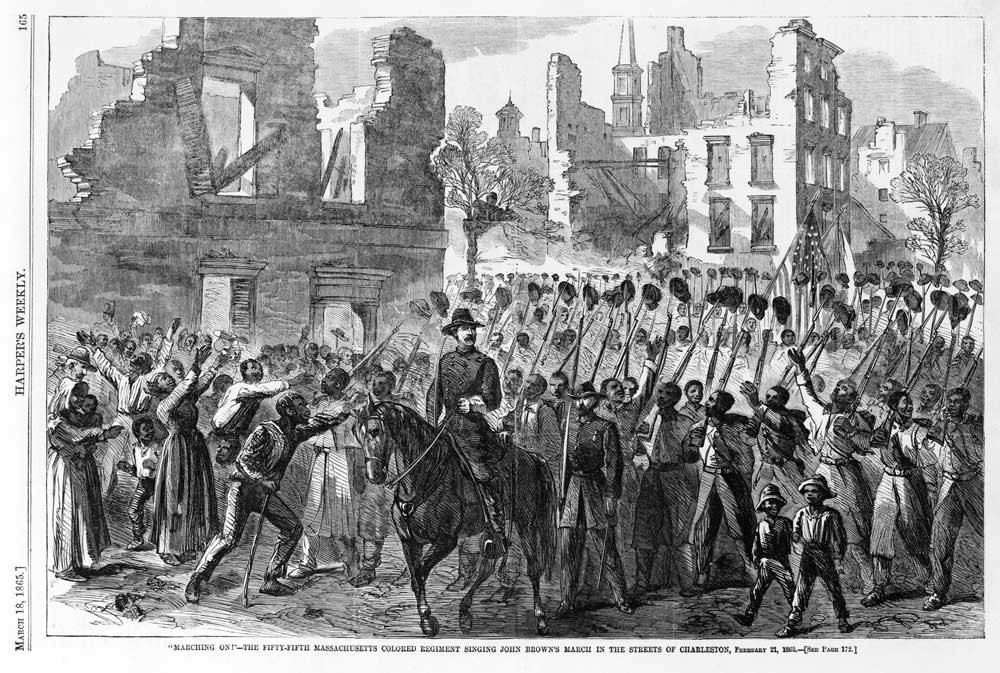 Then came Lincoln's Proclamation, which instigated change. The Proclamation allowed African-Americans to join the Union army. Within this context of change, the 54th Massachusetts Regiment was created in March 1863.  A sister company, the 55th Massachusetts was formed later.

General Lorenzo Thomas was sent to the Mississippi Valley area to recruit and form the "United States Colored Troops" regiment. Since African-Americans had not been permitted to join the army, only white officers were available to lead; of those, only a few would consider such a command because the black soldiers were untested on the battlefield. Colonel Robert Gould Shaw, a white officer and ardent abolitionist, provided the 54th Massachusetts with a demanding, yet supportive, leader.

Formed at Camp Meigs, Readville, Massachusetts, the 54th numbered about 650 and was one of the first all-black regiments of the Civil War. Unfortunately, they were paid less than white soldiers—white soldiers received $13 a month and $3.50 for clothes, while African-American soldiers were paid $7 a month and $3 for clothing. The 54th Massachusetts stood up for their rights and refused to accept their pay because of this kind of discrimination. Equal pay did not come until 1864.

The 54th trained for about three months in 1863, then paraded through the streets of Boston and sailed to South Carolina for battle. Their goal? Fort Wagner in South Carolina, a Confederate stronghold on Morris Island. Though black soldiers participated in many other battles, the battle at Fort Wagner was the first major battle that involved African-American troops.

They were untrained and unfamiliar with the horrors of battle, but they made two assaults on the fort. About 100 soldiers reached the gates on one assault that resulted in hand-to-hand combat before the 54th was driven back. Although the Union forces received heavy losses, given a badly planned nighttime attack, the 54th bore the lost of the greatest number of wounded and dead—247 men out of 600. Colonel Shaw was killed. Outgunned and outnumbered, they were ordered back; the attack had been repulsed.

The actions of the 54th Massachusetts shocked leaders and soldiers on both sides. Black troops had proven their bravery and competency. Sargent William Harvey Carney was teh first African American to be awarded the Congressional Medal of Honor for his actions that day. A film, Glory, was made in 1989 about the regiment and the attack; it brought to national attention the event and fame to some actors early in their career: Matthew Broderick, Denzel Washington, Cary Elwes, Morgan Freeman.

THIS PAGE IN PROGRESS! Use back function to return to previous page.  >>

WW2—U.S.S. Mason
The only battleship manned by a largely black crew.